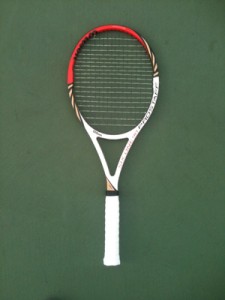 Rackets, which are approved for play under the Rules of Tennis, must comply with the specifications in Appendix II.

The International Tennis Federation shall rule on the question of whether any racket or prototype complies with Appendix II or is otherwise approved, or not approved, for play. Such ruling may be undertaken on its own initiative, or upon application by any party with a bona fide interest therein, including any player, equipment manufacturer or National Association or members thereof. Such rulings and applications shall be made in accordance with the applicable Review and Hearing Procedures of the International Tennis Federation (see Appendix VI).

Case 1: Is more than one set of strings allowed on the hitting surface of a racket? 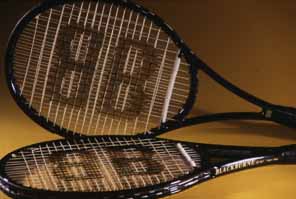 Decision: No. The rule mentions a pattern (not patterns) of crossed strings. (See Appendix II)

Case 2: Is the stringing pattern of a racket considered to be generally uniform and flat if the strings are on more than one plane?

Case 3: Can vibration damping devices be placed on the strings of a racket? If so, where can they be placed? 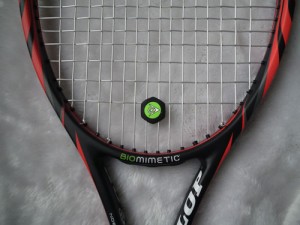 Decision: Yes, but these devices may only be placed outside the pattern of the crossed strings.

Case 4: During a point, a player accidentally breaks the strings. Can the player continue to play another point with this racket? 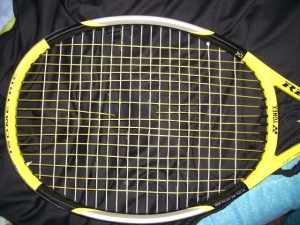 Decision: Yes, except where specifically prohibited by event organizers.
Case 5: Is a player allowed to use more than one racket at any time during play?

Case 6: Can a battery that affects playing characteristics be incorporated into a racket?

Decision: No. A battery is prohibited because it is an energy source, as are solar cells and other similar devices.