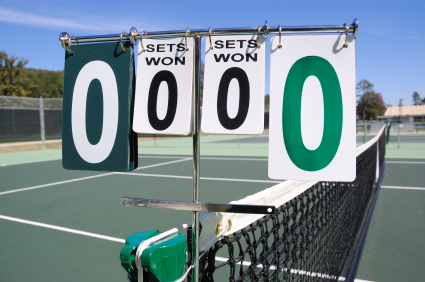 a. Standard game
A standard game is scored as follows with the server’s score being called first:

Fourth point – “Game” except that if each player/team has won three points, the score is “Deuce”.

After “Deuce”, the score is “Advantage” for the player/team who wins the next point.

A player/team needs to win two consecutive points immediately after “Deuce” to win the “Game”. 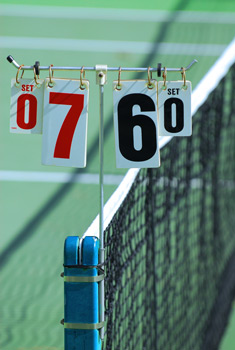 During a tie-break game, points are scored “Zero”,“1”, “2”, “3”, etc. The first player/team to win seven points wins the “Game” and “Set”, provided there is a margin of two points over the opponent(s). If necessary, the tie-break game shall continue until this margin is achieved.
The player whose turn it is to serve shall serve the first point of the tie-break game. The following two points shall be served by the opponent(s) (in doubles, the player of the opposing team due to serve next). After this, each player/team shall serve alternately for two consecutive points until the end of the tie-break game (in doubles, the rotation of service within each team shall continue in the same order as during that set).
The player/team whose turn it was to serve first in the tie-break game shall be the receiver in the first game of the following set.
Additional approved alternative scoring methods can be found in Appendix IV.

[USTA Comment: In an non-officiated match the Server should announce, in a voice audible to his opponent and spectators, the set score at the beginning of each game, and point scores as the game goes on. Misunderstandings will be avoided if this practice is followed.]