History of Tennis – Section 02 – The Racquet

History of the Tennis Racquet

Tennis derived from a game called Jeu de Paume (game of the palm) first played by French monks in the 11th or 12th century, and the first racquets were not racquets at all as they used the palm of their hands to strike the ball. 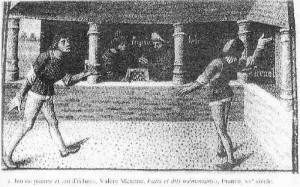 This early version of tennis was more like handball. First they played by hitting against a wall, but soon they started playing over a net. Hitting the ball with the bare hand often would cause bruised and swollen hands, broken fingers and torn nails so players began using a glove-like covering to protect the hand. These gloves did have several disadvantage for the player.  One, the glove proved to be tiresome to wear. It also gave the player less feel, touch and finesse then using a bare hand.  Eventually players started to modify the gloves to try and gain a competitive advantage.  Some players used webbing between the fingers while others started to use a wooden paddle called a battoir instead of a glove. 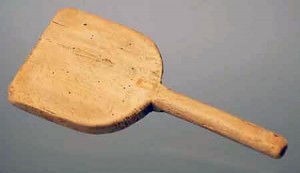 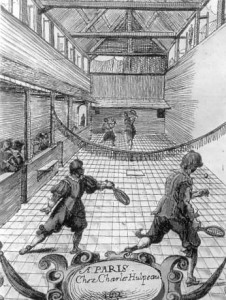 The Arabic ‘rahat al-yad ’ means ‘palm of the hand’ or ‘palm-shaped’: it’s believed that this provides the etymological root of the term ‘racket’ or ‘racquet’ (this said, others argue that the racket was invented in the Low Countries and that its name comes from the Dutch verb ‘raecke’ – to hit or strike).

Initially there were many shapes and stringing methods but eventually the racquet started to take on some uniform properties.  The early racquets had a long handle and a small, teardrop-shaped head. The racquets head shape was also lopsided.  This made it look more like a hand.  By the late 1500’s, racquets were in widespread use.

A racquet with long handle and tear drop shaped head.

In 1874, Major Walter C. Wingfield registered his patent in London for the equipment and rules of an outdoor lawn tennis that is generally considered the first version the game we call tennis today. 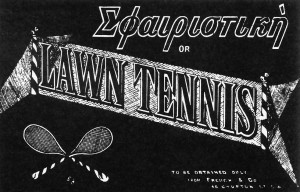 Within a year, Wingfield’s equipment sets had been sold for use in Russia, India, Canada, and China. The racquets had changed slightly over the last few hundred years with the head having grown to the standard size everyone is accustom to seeing. The shape wasn’t quite as oval as most modern wooden racquets. The head was quite a bit wider and flatter toward the top.

Racquets saw only minor changes in there appearance between 1874 and the end of the wooden racquet era more than 100 years later.

Wooden racquets did become quite a bit more technologically advanced over those 100 years even though there appearance didn’t change much.   Improvements in laminating technology (using thin layers of wood glued together), but they remained heavy (13-14 ounces), with small heads (around 65 square inches). Compared to the contemporary racquet, even the best wood racquets were cumbersome and lacking in power.

An alternative to wooden racquets first showed up in the late 1800’s.  A racquet with a metal head existed as early as 1889, but it never saw widespread use. Wood’s use as a frame material didn’t undergo any real challenge until 1967, when Wilson Sporting Goods introduced the first popular metal racquet, the T2000. 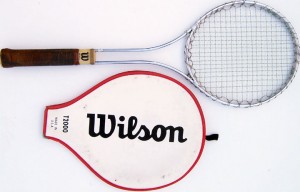 Stronger and lighter than wood, it became a top seller, and Jimmy Connors became its most famous user, playing at the top of men’s professional tennis for much of the 1970’s using the long-throated, small-headed steel frame.

In 1976, Howard Head, then working with the Prince brand, introduced the first oversized racquet to gain widespread popularity, the Prince Classic.

The Prince Classic and its more expensive cousin, the Prince Pro, were top sellers. Both had aluminum frames and a string area more than 50 percent larger than the standard 65 square inch wood racquet. 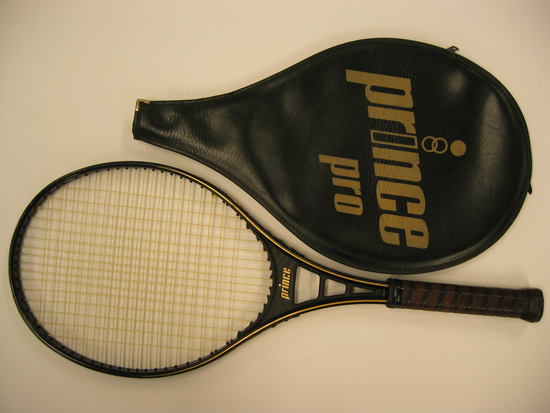 The light weight, huge sweet spot, and greatly increased power of these first oversized racquets made tennis much easier for non-advanced players. For powerful, more advanced players, the mixture of flexibility and power in the frames resulted in too much unpredictability in where the ball would end up. Hard, off-center shots would momentarily distort the aluminum frame, changing the direction in which the string plane was facing, and the lively string bed would then send the ball rocketing off in a somewhat unintended direction.
Advanced players needed a stiffer frame material, and the best material proved to be a mixture of carbon fibers and a plastic resin to bind them together. This new material acquired the name “graphite,” even though it isn’t true graphite such as you would find in a pencil or in lock lubricant. The hallmark of a good racquet quickly became graphite construction. 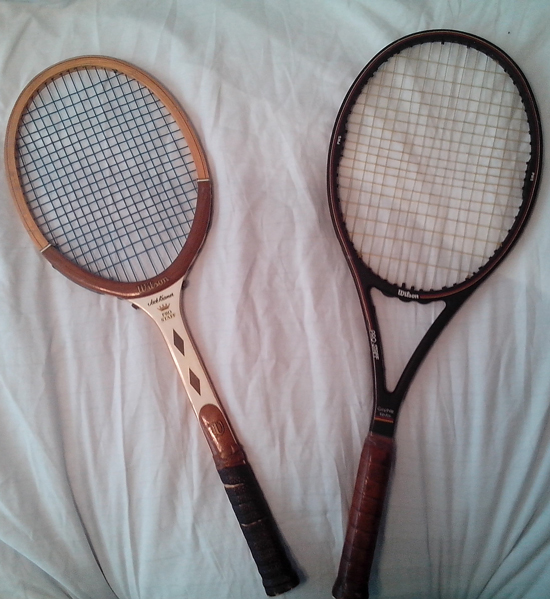 Out with the old in with the new – Wooden Pro Staff to Graphite Pro Staff.

By 1980, racquets could pretty much be divided into two classes: inexpensive racquets made of aluminum and expensive ones made of graphite or a composite.

Wood no longer offered anything that another material couldn’t provide better — except for antique and collectible value.
The two key properties for a racquet material are stiffness and weight. Graphite remains the most common choice for stiff racquets, and the technology for adding stiffness without adding weight continues to improve. One of the most famous of the early graphite racquets was the Dunlop Max 200G, used by both John McEnroe and Steffi Graf. 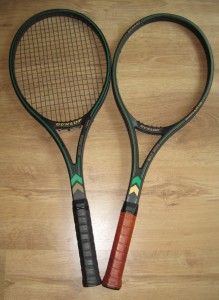 Its weight in 1980 was 12.5 ounces. Over the 20 years since, average racquet weights have decreased to around 10.5 ounces, with some racquets as light as 7 ounces. New materials such as ceramics, fiberglass, boron, titanium, Kevlar, and Twaron are constantly being tried, almost always in a mix with graphite.

In 1987, Wilson came up with an idea for increasing racquet stiffness without finding a stiffer material. Wilson’s Profile racquet was the first “widebody.”

In retrospect, it seems strange that no one thought of the idea sooner to increase the thickness of the frame along the direction in which it must resist the impact of the ball. The Profile was a monster of a racquet, with a frame 39 mm wide at the middle of its tapered head, more than twice the width of the classic wooden frame. By the mid 1990’s, such extreme widths had fallen out of favor, but the widebody innovation carries forward: most frames sold today are wider than the pre-widebody standard.

The racquet makers have, to some extent, suffered from their own success. Unlike wood racquets, which warped, cracked, and dried out with age, graphite racquets can last for many years without a noticeable loss of performance. A 10-year-old graphite racquet can be so good and so durable that its owner has little motivation to replace it. The racquet companies have met this problem with a stream of innovations, some of which, like the oversized head, wider frame, and lighter weight are evident in almost every racquet made today. Other innovations have been less universal, such as extreme head-heavy balance as seen in the Wilson Hammer racquets, and extra length, first introduced by Dunlop.
What’s next? How about an electronic racquet? Head has come out with a racquet that uses piezoelectric technology. Piezoelectric materials convert vibration or motion to and from electrical energy. Head’s new racquet takes the vibration resulting from impact with the ball and converts it to electrical energy, which serves to dampen that vibration. A circuit board in the racquet’s handle then amplifies that electrical energy and sends it back to the piezoelectric ceramic composites in the frame, causing those materials to stiffen.

The medieval French monks would be impressed.