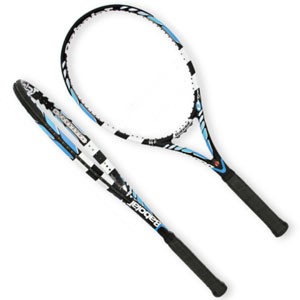 The tennis racquet frame is the part of the racquet that varies most from manufacturer to manufacturer.  The most obvious differences are paint schemes which is more of an aesthetic thing then a performance thing. Others are less obvious but far more important. These less obvious differences to the frame can greatly affect game play. Some can greatly enhance a players abilities while others can diminish how a player plays.  The crazy thing is that while one racquet type can make a player play horrible, that same racquet can make someone else play much better.  Just like types of tennis players, there are many types of racquets with what seems like an almost infinite combination of differences. Some of the numerous possibilities for the frame alone are: head size, head shape, grip material, grip size, frame thickness, frame stiffness, frame weight, frame balance, frame length, frame material. Then there are numerous differences to other elements of the racquets like the strings and accessories that can be added to the racquet.  These differences are covered in greater detail in other sections of this course.

With so many differences how does one pick the right racquet to use? Hopefully after this course you will know how to pick the proper racquet for your type of play.

If you just want to give tennis a try, then just go dig through your closet and pull out any old racquet you may have and give the game a try.

or go to a local store and buy a cheap one.

The beam is the area on either side of the head. The beam does not increase the length or width of a racquet, but it increases the racquet’s depth (or thickness). If you look at a couple racquets from the side, you notice that some racquets have wider beams than others.

Wide beams can add power to your shots. However, many players find that a wide beam enhances the trampoline effect of the strings to such a degree that they have trouble controlling the direction of their shots. The lack of control can lead you to start chopping and poking at the ball rather than taking a smooth, long swing.

A tennis rackets balance point is simply, the point in which the racket is perfectly balanced. This is measured from the butt of the tennis racket up, and usually ranges from 290mm to 360mm in some cases.

A lot of it comes down to personal preference, however it’s worth noting that head light tennis rackets are generally more maneuverable, and as such easier for volleying and net play. Generally head heavy tennis rackets usually provide more power and are easier to hit top spin with. Balanced tennis rackets obviously provide a little bit of both, but you would usually see big hitting base-liners using balanced frames at the back of the court.
Tennis
Racket
Head
Sizes
and
Shapes

Tennis rackets come in a wide range of different shapes and sizes, with the head size and shape being the most notable difference between tennis rackets. Head sizes are usually defined as:

The head shape is dictated to by the tennis rackets head size, however in some cases they can be more circular, rounded or isometric.
The
Beam
Width
of
the
Tennis
Racket

Over-sized: Beginners really like the over-sized and even jumbo frames, which offer between 100 and a whopping 140 square inches of strung surface. Such frames give you a larger sweet spot simply because the hitting surface is bigger, and they allow you to hit the ball farther from the heart of the sweet spot and still make a good shot.

Standard-sized heads: Ranging from 80 to 85 square inches, standard-size heads are now obsolete. They give you a smaller strung surface and sweet spot, making it more difficult to produce crisp, clean shots.

A racquet’s balance is either head heavy, head light, or even. To check a frame’s balance, measure it lengthwise and balance it at its exact center. If the head dips down, the racquet is head heavy. If the handle dips down, it’s head light.

Head-heavy racquets give you more power on ground strokes but are less maneuverable, which can be a problem when you’re at the net. Players who like to rally from the baseline tend to prefer head-heavy frames.

Head-light racquets are easier to maneuver at net, but they won’t deliver the power of head-heavy frames when you hit from the baseline. Serve-and-volleyers, all-court players, and advanced players who take full swings generally like head-light racquets.

Evenly balanced frames offer a blend of power from the baseline and maneuverability at the net. They usually appeal to all-court players.

Aluminum is a less expensive alternative to graphite frames. The frame of an aluminum racket can be tubular or bi-hollow. The shape determines flexibility and durability. Aluminum is more commonly found in less expensive rackets and offers a moderate amount of power and feel. Beginning players might consider a bi-hollow aluminum frame, which is more flexible and forgiving. Tubular aluminum tends to benefit more experienced players who hit with power.

Recently, a clutch of new racquets made from a very strong, extremely light material called titanium has hit the market. Titanium is similar to aluminum. Either aluminum or titanium is an acceptable choice for beginners.

Different types and grades of graphite, which is a lightweight material derived from carbon, are used in the design of a tennis racket. Racket frames can be made of 100 percent graphite or a composite of graphite and other materials such as Kevlar, fiberglass, copper, titanium and tungsten. Pure graphite frames tend to have a stiffer feel, making them more suitable for players who hit with power. Composite graphite frames tend to be more flexible and transmit fewer vibrations, making them ideal for beginning players who tend to mishit.

Many people still have wood or fiberglass racquets lying around collecting cobwebs in the attic or cellar. You can use these racquets, but doing so won’t help your game any. All those racquets feature the obsolete, standard-sized heads. 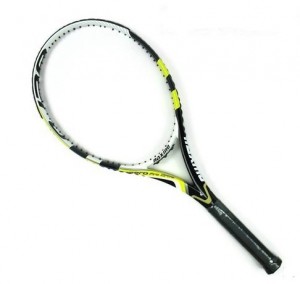 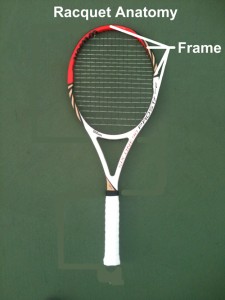 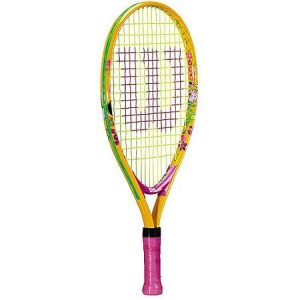 Most racquets are made from a high modulus graphite and/or carbon fiber. This makes the frame lighter which makes the racquet more powerful as a lighter racquet can be swung faster. 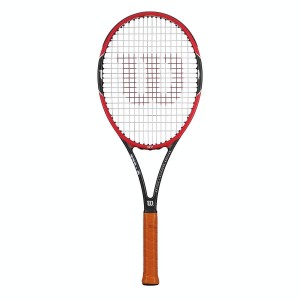 An old pro staff next to a new pro staff.

A racquet with several materials is called a composite racquet. Most racquets on the market today are composite racquets.  It’s called composite when other materials like titanium, tungsten, Kevlar or boron is put into the frame. All these materials alter the characteristics of the racket. 100% graphite is very stiff so it is generally the preference of power hitters. Kevlar and boron make the racquets lighter which increase swing speed. Composite racquets tend to be more flexible which makes them transmit less vibrations making them great for beginner or intermediate level players who tend to mishit the ball more often.

The new pro staff is made of braided Kevlar and graphite / basalt fibers.

Graphite based racquets have been the preferred materials in racquet since the mid to early 1980’s.  Before that time wood was the predominate racquet material.  Wood racquets were even more fragile then graphite as changes in temperature and other weather elements could warp the racquet. 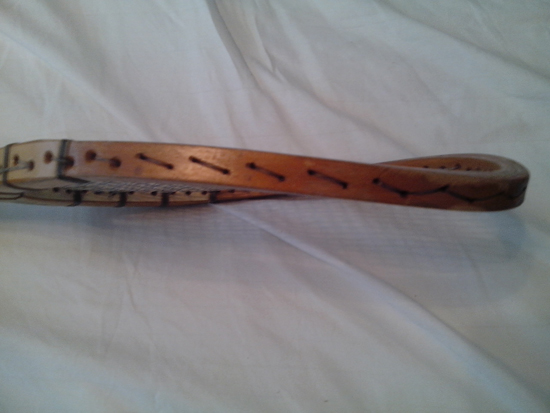 One way to counteract warping was to put the racquet into a bracket. 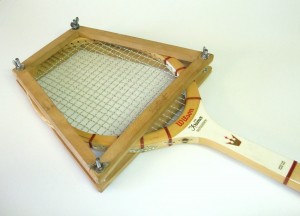 Wooden racquet with a bracket.

Frames vary in many ways, using the right frame for your type of game is a very important factor. Some frames vary in thickness. Generally the thinner the racquet the less power it has, the thicker the racquet the more power it has. Other factors influencing racquets are frame stability, how much power it can generate, the size of the the sweet spot (the power zone of the racquet), how much it will vibrate and how much control the racquet has.  Racquets will also be weighted differently. Racquet frames can distribute the weight across the racquet differently from frame to frame thus changing the balance. Some racquets are heavier at the top some are uniformly heavy and still others are heavier in the handle.

For a more thorough explanation of the racquet frame click here. 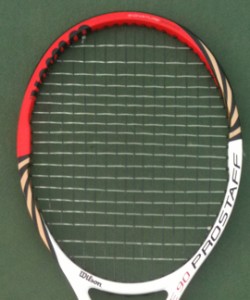 The racquet head is the round part at the top of the racquet. 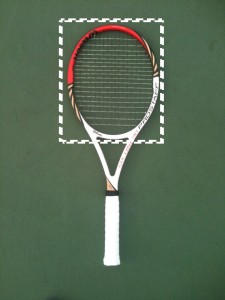 The racquet head is inside the border.

Head size is the area of the hitting plane inside the head of the racquet and is measured in square inches or centimeters squared. Power is directly related to head size. A larger head offers a larger hitting area, more power, and a larger sweet spot while providing more forgiveness on off-center shots. Smaller head sizes offer more control and less power. Head size is a personal preference.

Head shape can vary from racquet to racquet. The most common shapes are Elliptical, 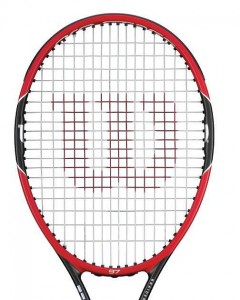 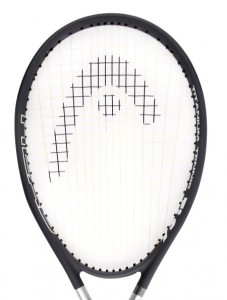 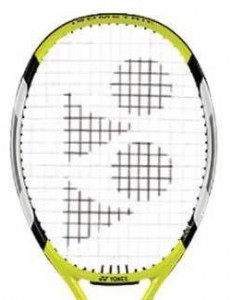 Elliptical is the most common head shape. Tear-drop shaped racquets have the longest main string length, when compared to other head shapes of the same surface area. Longer main strings length increase power. Additionally, a tear-drop shape racquet has the widest point of the hoop closer to the 12 o’clock position which moves the sweet spot higher in the hoop. Square head shapes are designed to have the center 4 to 6 main strings the same length and the center 4 – 6 cross strings the same length. This centers the sweet spot and increases the overall size. An elliptical shaped racquet…

When buying a racquet, the first thing you must decide is whether you want one that will provide you with power, control, or a blend of the two.

If you’re a beginner, you should play with a racquet that’s light enough so it’s easy to swing and powerful enough so it adds giddyup to your game. Our advice:

Go with a racquet that weighs between 9 and 10 ounces, has an oversize head measuring at least 100 square inches (which will give you more power and improve your chances of making good contact with the ball), and has a beam width (the thickness of the frame) that’s at least 25 millimeters thick. A “wide” beam makes the frame stiff and therefore more powerful.

If you’re an advanced player and can generate your own juice on the court, it’s a different story. You’re looking for more control, and you can get it with a racquet that’s heavier (over 10.5 ounces) and has a smaller head and thinner beam.

If you’re an intermediate, try a racquet that offers a blend of power and control, falling between the heavy, thin-beamed control racquets and the lighter and bigger power sticks. “For most levels of play, you need a racquet that isn’t too powerful and yet isn’t all about control,” says Bruce Levine, TENNIS Magazine’s racquet advisor, “because power won’t mean a thing if you can’t keep the ball in the court, and all the control in the world does you no good if you can’t get enough gas on your shots.”

Traditional Length or Extra Long?
It wasn’t too many years ago that every racquet was 27 inches long. Now, adult racquets come in lengths up to 28 inches (extra long). Everything else being equal, extra-long frames are more powerful than 27-inch models because the contact point is farther away from your body, resulting in greater momentum on your swing and more pop on your shots. The downside is that an extra-long racquet may not be as maneuverable as a 27-inch frame.