Just like there are several grips and elements to those grips that a player can use when hitting a forehand, there are also different swings and elements of those swings that a player has to use and think about when hitting a forehand. The way a player swings can affect the amount of spin that is put on the ball, whether their swing will be horizontal or vertical, the power that they generate from their shot, The type of swing used can also help to disguise a shot or make it obvious which shot is about to be hit. There are three different components to a swing (just like there are 3 dimensions).

Groundstrokes are basically a circular motion with the forehand swing looking like a Nike swoosh when viewed from the side.

This type of swing is call a loop swing because the swing mimics a loop.

While other motions such as a straight take back

or a low take back

are not wrong. The loop is the best type of motion to use and is the preferred motion for almost all pros.

Here is an image of Taylor Dent’s forehand motion 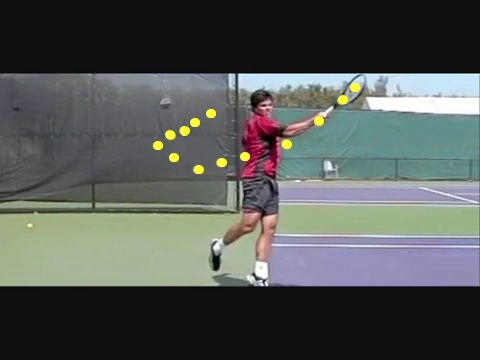 Notice the similarities to the swoosh? 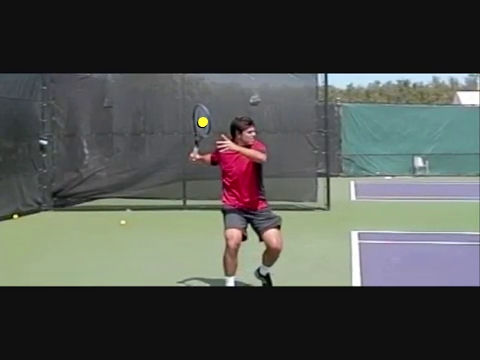 get low (under the ball) 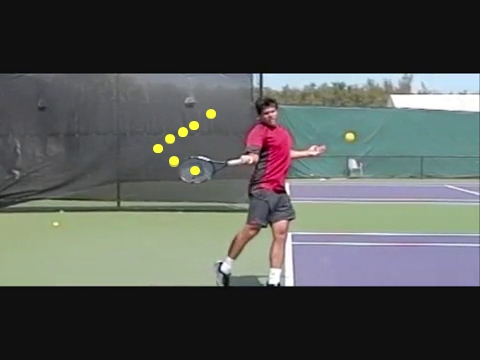 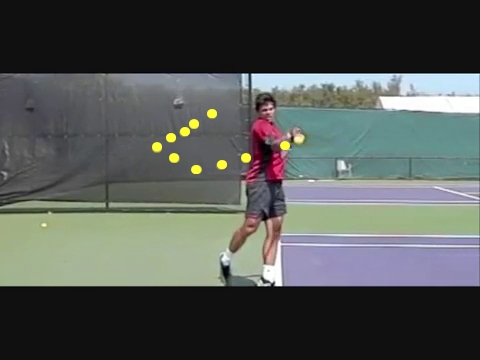 finish much higher than the ball with an elongated follow through. 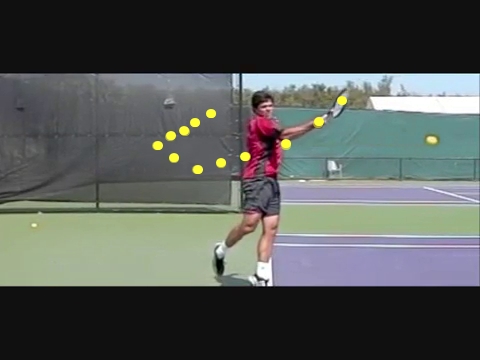 A straight take back swing will tend to look more like a straight line as players will rarely get under the ball.

Whereas a low take back will look more like a staircase as the swing will (hopefully) start low under the ball and finish high above the ball.

There are many reasons why the loop swing is the preferred swing by most pro’s and advanced players. The biggest advantage of the loop swing is it can give you a more consistent swing as all shots can start from this position. By starting every shot the same way you can quickly get into a good groove. Starting from a high position will recruit different muscles then starting from a low position. By recruiting different muscles for different forehand shots it will be much harder to groove the shot and be consistent with it. If the racquet starts high a volley can be hit 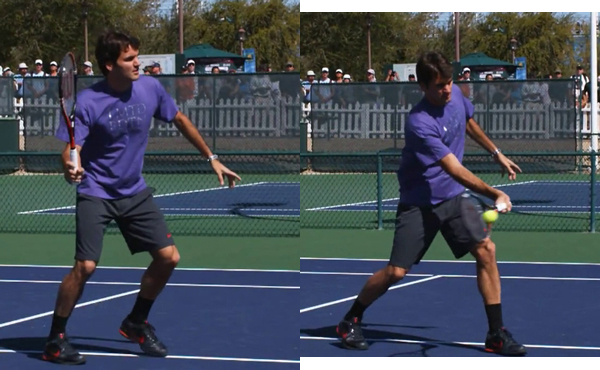 as well as a groundstroke. 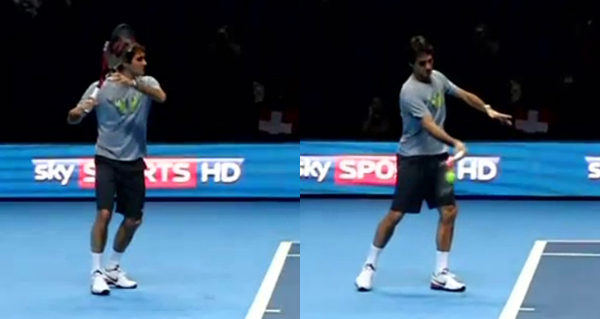 Different spins can also be put on the ball with topspin and underspin both easily applied to a ball from a high position. A loop swing can also lead to much better disguising of shots since every shot and spin can be applied from a high racquet position. If somebody who uses a low back swing where to attempt a drop shot they would need to start with the racquet from a high position and since they normal start from a low position it is obvious before they hit the ball that a drop shot is coming. A good player will notice this and start running to where the drop shot will land well before their opponent has even hit the ball. This could make a big difference between two closely matched players. 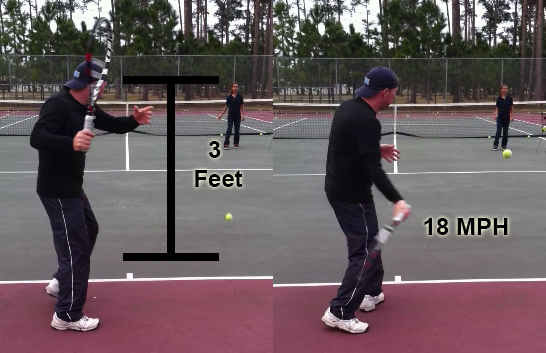 This will make the racquet speed about 12 mph more at ball contact compared to a straight back swing as the racquet only drops about 2 feet. 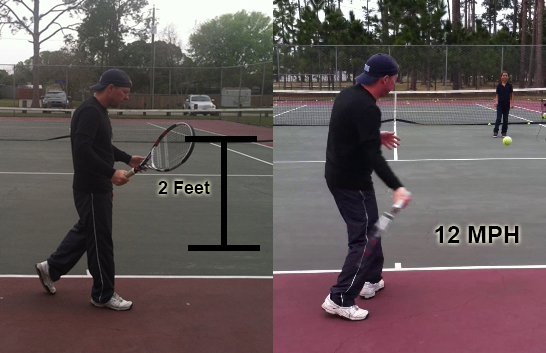 and approximately 18 mph over a low take back swing. 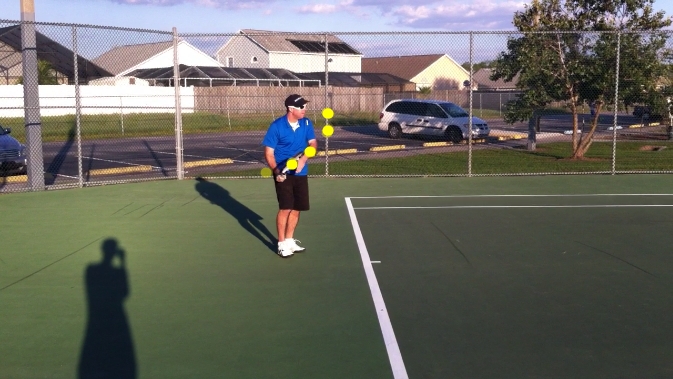 A low take back swing actually has to fight against gravity! Because of gravity, a player who uses a low take back will need to use their arm muscles to swing up. With the loop swing those muscles will not need to be recruited as gravity does the work for them. 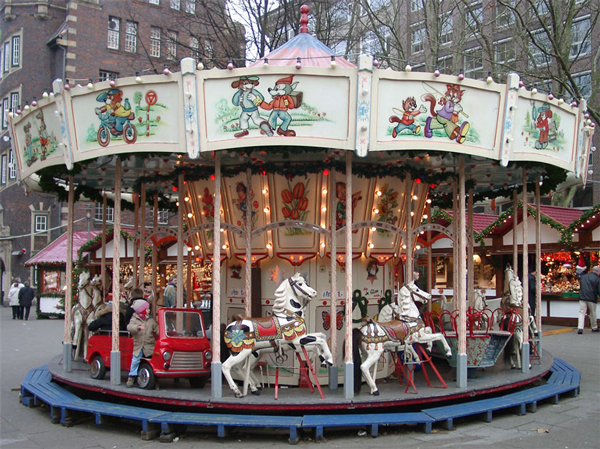 A circular type swing makes it very difficult to generate topspin on the ball as a horizontal swing rarely gets under the ball. 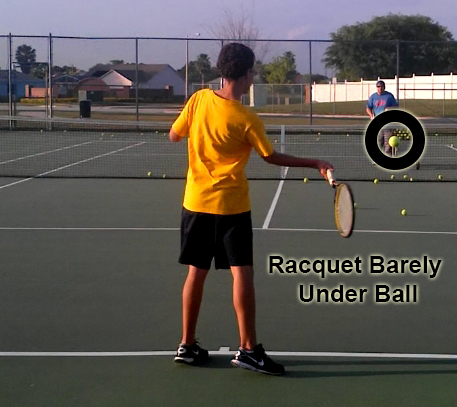 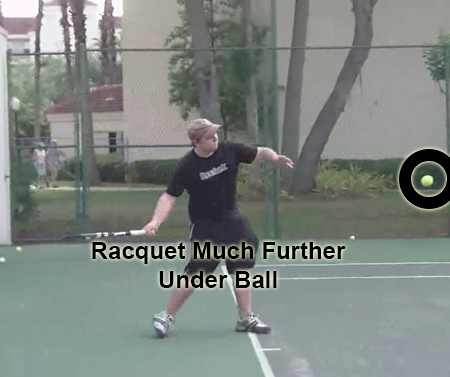 A horizontal swing also makes the overall swing length longer where it shouldn’t be longer (before the ball is hit) as often times the swing will end up going behind the back. This can add an extra 8 feet to the overall swing. 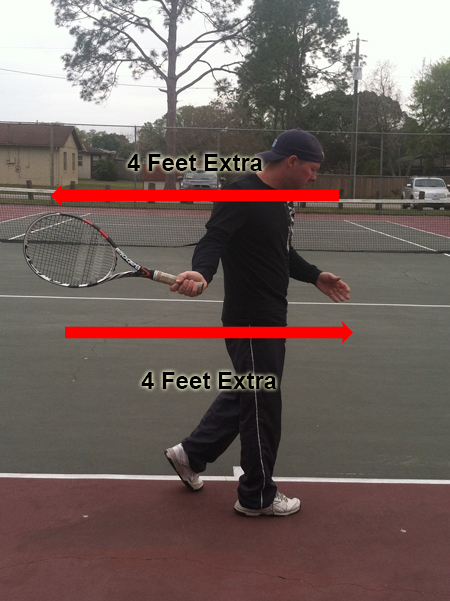 A horizontal swing also shortens the overall hit zone making it more difficult to make consistently good contact with the ball as the swing will not go out towards the target, but will instead go across the body. Hover over the below image to see a horizontal swing shortening the hit zone. 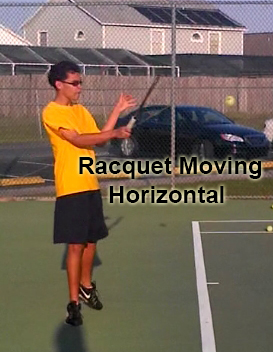 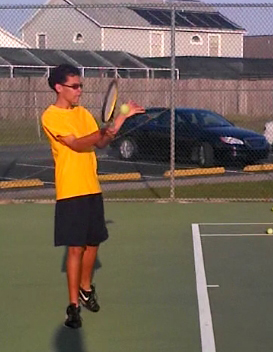 For these reasons the swing needs to be vertical. Think of the swing emulating a Ferris wheel. 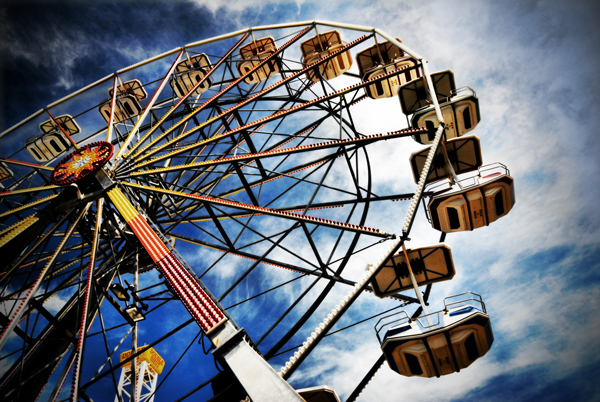 A Ferris wheel goes up and down. By emulating a Ferris wheel you will have a vertical swing which can help generate topspin on the ball. By swinging vertically you will be more easily able to lift the ball over the net and to keep it within the 20 degree hitting window that the court has. It will give you a more compact swing at the start and an elongated swing for the follow through. This elongated swing increase the hitting zone. The hit zone is the actually area the ball can be successfully hit in and can only be extended out after the contact point. This will be explained in greater detail in the follow through section of the forehand.

Here is a few pictures of Tomas Berdych’s vertical swing

Also notice how the swing stays on Tomas’ right hand side of his body. The racquet does not go behind his back. Players who use a straight back swing or low take back swing will more likely bring the racquet behind their body which will facilitate a horizontal swing.

The third swing component for an optimal forehand swing is whether the swing follows one of 4 potential patterns:

an inside in pattern 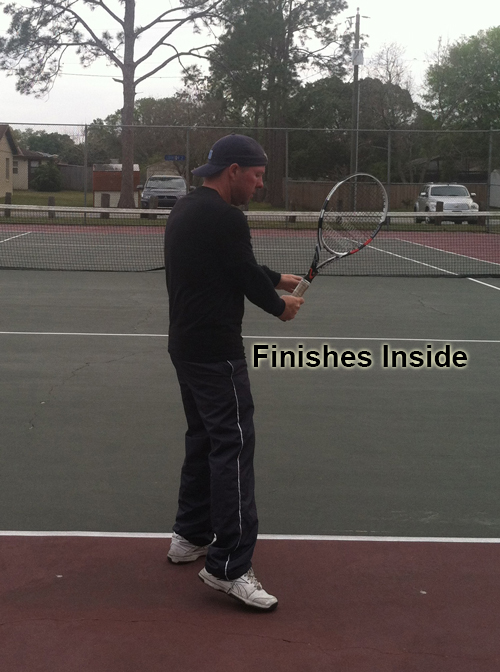 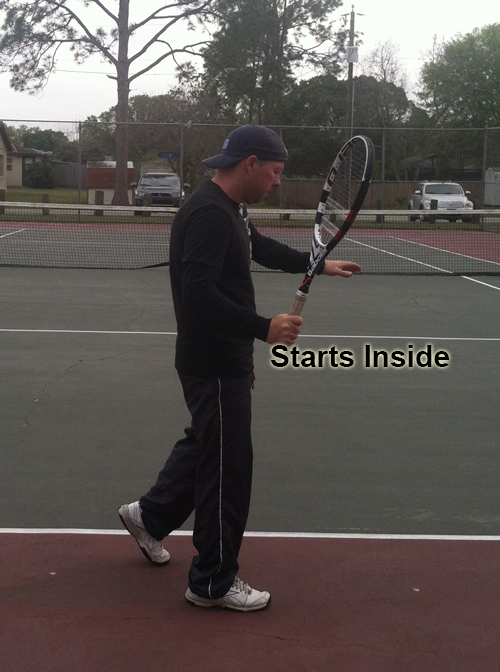 an outside in pattern 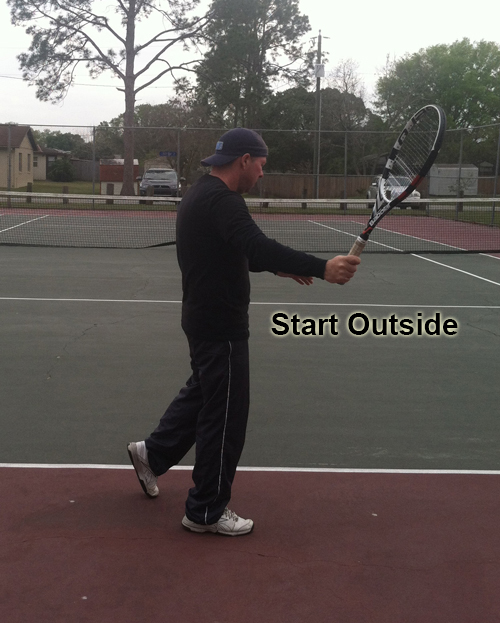 an inside out pattern 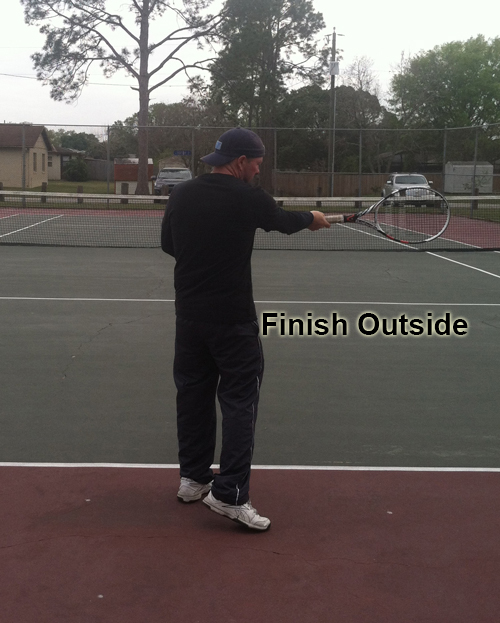 or an outside outside pattern

This is not to be confused with an inside out shot (explained in detail later). Ideally you want an inside out pattern that start on the inside (closer to the body) and finishes away from the body at the point of contact.. Once again, here is Tomas Berdych, 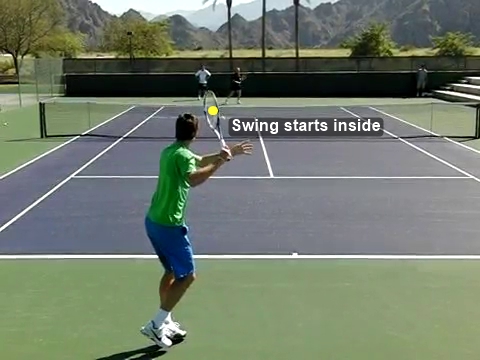 See how the racquet starts close to the body? 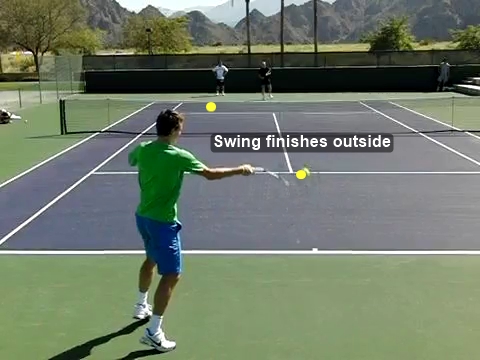 then extends out, away from the body. at the contact point.

An inside outside swing pattern will facilitate a vertical swing as well as give a more powerful shot as the racquet will be further away from the body when the ball is hit. An inside in swing is used by professional players at times, but not near as often as an inside out swing. Whereas recreational players will tend to do an outside in type of swing. Never really seen an outside out swing. I have a feeling that type of shot would hurt!

An inside out swing will help keep the racquet swing vertical. Whereas an outside in swing (used by lots of recreational players) will tend to make the swing end up being horizontal.

The ideal stroke pattern for the forehand is a vertical swing that takes into consideration all the physical laws of the universe (discussed here). It looks like a Nike swoosh and starts on the inside of the body before contact and ends up away from the body at contact.