Breathing it not something people need to think about with much regularity and that is lucky for us. Imagine if you had to think about breathing? Most likely it would take up almost all of your thought processes throughout the day. It would make it virtually impossible to sleep, it would even make it difficult to talk (well for some people that might not be a bad thing!) much less play sports. Because people don’t think about breathing they often times do not think much about it when playing tennis. But, much like footwork, it needs be thought about as correct breathing makes it easier to play tennis.

What Causes Us To Breathe?

A respiratory control center in the brain stem controls breathing. 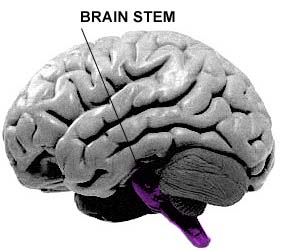 This center sends ongoing signals down the spine and to the muscles involved in breathing. These signals ensure the breathing muscles contract (tighten) and relax regularly. This allows breathing to happen automatically, without needing to be aware of it.

Humans can, to a degree, control breathing rate by breathing faster or slower or even by holding their breath. Breathing will also change when the body is being worked harder (like when playing sports). Physical activities require fuel for the bodies muscles. One of the required ingredients is oxygen. The more someone exercise, the more the muscles work and the more oxygen they require. To get more oxygen to the body it must breathe quicker. Luckily this happens automatically and is usually well controlled by the respiratory control center.

Unfortunately, the brain can some times lose control of the bodies breathing. Loss of breathing control can lead to improper fine muscular coordination which is important in tennis as losing this will tense the body making it hard to make smooth, powerful swings. It can also lead to early fatigue which can have catastrophic consequences later in the match.

In order to maintain good breathing during a tennis match, breath control needs to be practiced as its not natural (unfortunately like most things in tennis).

Breathing Before A Match

There are lots of things done before a match that helps determine whether a player wins or loses. Obvious things like what a player eats and how hydrated a player is or how much effort a player puts into physical training help determine whether a player has an advantage before the match starts. Most players pay no attention to their breathing before a match, but breathing correctly can help give an advantage before the match even starts. Before a match or when nervous, (Being nervous before a match SHOULD happen. If a player doesn’t get nervous before a match they most likely don’t care enough about the match) a player should pay extra attention to make sure their breathing is continuous, deliberate, slow and smooth. Focusing on breathing can keep the player relaxed and keep them from thinking too much about being nervous. Too high of a respiratory rate before a match will increase the heart rate and can lead to a substantial loss of fluid.

Breathing While Hitting The Ball

Timing when to breath when hitting the ball is very important to a good, consistent swing. Breath in from the nose as the ball is coming, this should happen when doing the unit turn. Hover over the below image to see when to breath in, 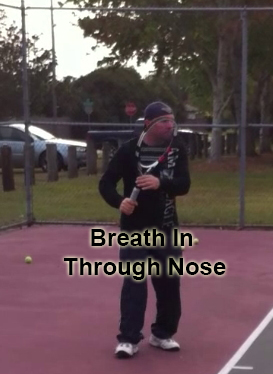 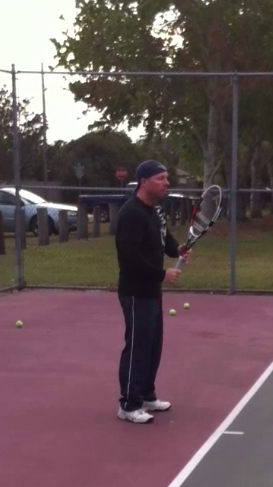 Exhale from the mouth as the racquet comes forward. This helps keep the body relaxed and can add a substantial amount of power to the shot. Hover over the below image to see when to breath out, 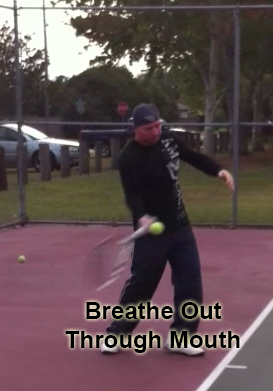 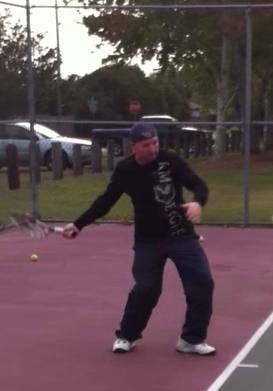 Practice this breathing pattern regularly and it will become more natural in a match.

Maintaining a continuous breathing pattern regardless of the situation can be difficult as often times the body will just increase the breathing rate without us even knowing about it. Since we normally don’t have to think about breathing, we wont notice these changes. There is often a tendency to tighten up and hold your breath under pressure. Resist this urge through practice and regular attention to your respiration quality.

Inhaling should be slow, smooth, rhythmic and from deep in the lower region of your stomach. This allows greater amounts of oxygen to be taken in and prevents the kind of short, rapid breathing that can occur in panic situations.

Exhaling should be slow, forceful and deliberate.

Changeovers are a good time to moderate your breathing pattern by taking slow deep breaths (4-6 seconds) followed by even slower exhalations (6-8 seconds). 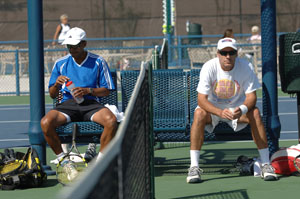 Breathing Before A Point Starts

Prior to serving or receiving is another good time to focus on breathing. The key is to get control of your oxygen intake before the point and maintain control throughout the point.
Once again try to slowly inhale and then slowly exhale. This will help slow down your heart rate and can help cool down the body too.

With enough practice breathing correctly during and before a tennis match will happen without a lot of thought. But, there will still be times no matter how much it is practiced, that thought will need to be put into it. Especially during high pressure situations. Knowing that breathing can get out of control and paying attention to it during the times it can get out of control can make a match much easier.