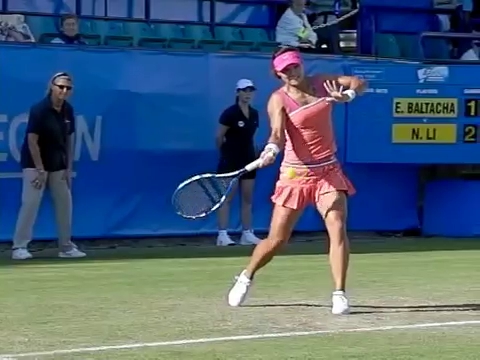 There are many misconceptions with the forward swing of the forehand. The biggest one revolves around the supposed movement of the wrist before impacting the ball. The Advanced Tennis Research website states that in “virtually all cases the wrist plays no role in generating the stroke, and releases only long after the ball is off the racquet. This basically means the wrist stays locked until well after the ball has been hit.

The forward swing is actually the simplest part of the swing if done correctly as there are few problems that can happen here. The bodies momentum will swing the racquet forward with little to no need to use the arms muscles. Quite frankly, there is just not enough time to make any real mistakes once the racquet starts swinging forward as this part of the swing happens really fast. Unfortunately the mistakes that are made generally lead to big mistakes with the end results of the shot.

The racquet coming forward is the start of the forward part of the swing. The rest of the body will have already started forward before this happens.

The Hitting Arm and Hand

Once the racquet starts to rotate forward several aspects of the swing will happen simultaneously and rather quickly. The arm will swing forward almost in a pendulum manner. 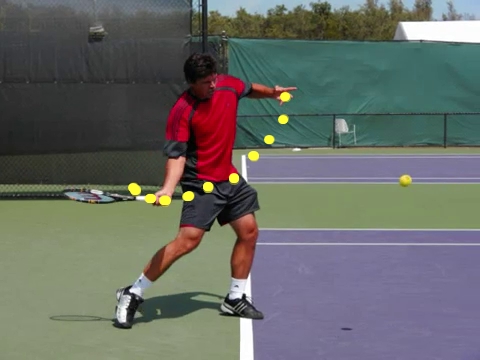 Since the arm was already straightened out at the beginning of the racquet drop no further movement of the arm or wrist is needed as the arm, again, will go forward because of the kinetic energy generated from the decelerating of the hips and legs, not from using the arm’s muscles.

Many people wrongly start the forward part of the swing by bringing their hitting arm forward first. This will turn the forehand swing into an arm swing by activating the muscles in the arm. This will have the effect of taking the arm out of sync with the body by putting the arm ahead of the body. This will make the power from the swing come mostly from the arm instead of the body. The arm is one of the weaker parts of the body. A person can lift much more weight with their legs or core then they can with their arms. This will lead to a substantially less powerful shot. By only using the arm instead of the whole body, it will also make it much more difficult to lift the ball over the net.

The forehand swing is not an arm swing at all, in fact the arm does not even have to do much movement to swing forward. If the arm is kept relaxed during the racquet drop and gravity is the force used to drop the racquet, the arm muscles will be less likely to activate any additional muscles during the swing as there will not be enough time to activate them. Plus, there is no need to activate any additional arm muscles. The force of gravity plus the build up of kinetic energy is more than adequate to hit a very powerful forehand. In fact, this is what virtually every pro does.

To prove that the arm muscles do not need to be used to swing, start from the ready position, but keep your hitting arm straight

Do a unit turn while keeping the arm straight

Now just bend the knees and let the racquet fall on its own.

At the bottom of the racquet drop position, without moving the arm, quickly bring the right hip forward 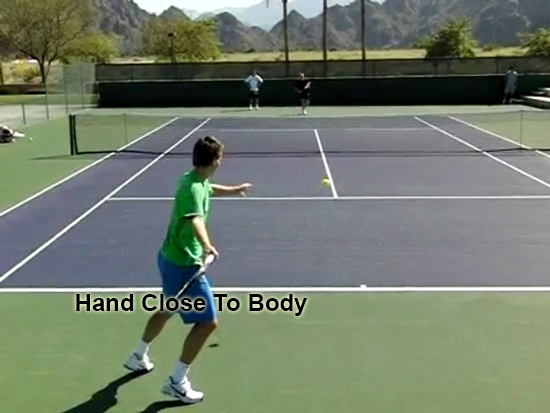 This is why the swing is called an inside out swing. The swing starts from close to the body (inside) and goes away (outside) from the body. Moving the hand (and racquet away from the body adds a tremendous amount of power to the swing. The greater the radius of the swing the more power that can be generated using the same amount of energy. The further the racquet is away from the body at contact the more power the swing will have compared to a swing that is closer to the body. For a greater explanation of this click here. 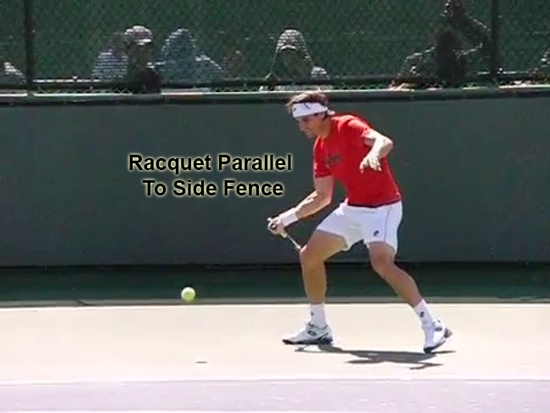 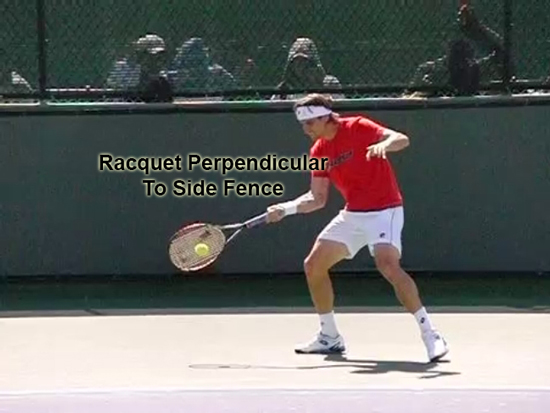 The racquet head is semi-closed at the start of the forward swing. As the racquet and hand come forward the racquet face will automatically move into a vertical position which is necessary for proper contact of the ball. 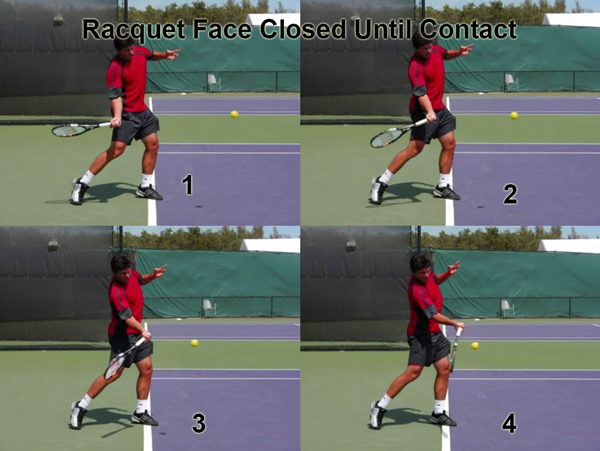 This can be proven by taking your hand and putting the palm down in front of you.

See how the palm eventually ends up vertical?

As the racquet starts to come forward the head of the racquet will probably be slightly lower than the wrist. 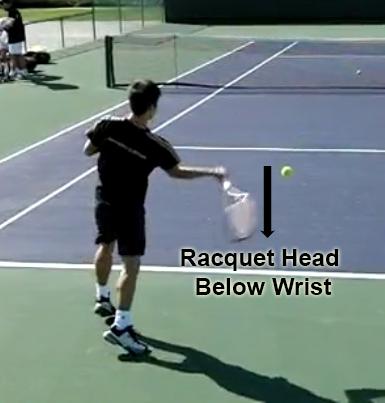 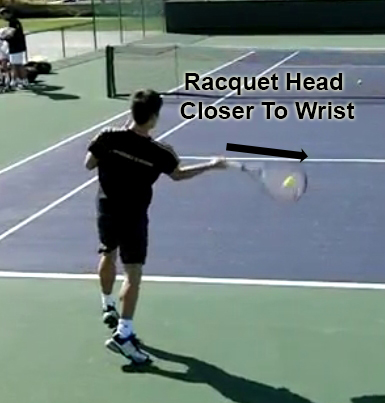 The wrist should stay locked with a 30 degree bend throughout the forward part of the swing. 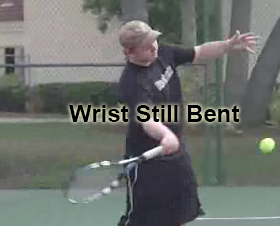 There is no reason to move the wrist while swinging the racquet forward. Moving the wrist is not needed to obtain additional topspin if the rest of the swing is done correctly. Movement of the wrist can help to generate topspin on the ball as it can put the racquet head further under the ball, but the loosening of the wrist will make the racquet head less stable and there will be a substantial loss of control. The wrist should continue to be behind the racquet.

The left arm will have started rotating forward prior to the racquet swinging forward. Hover over the below image of Andy Roddick to see this happen. 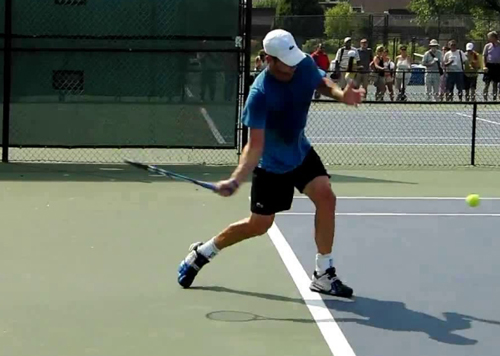 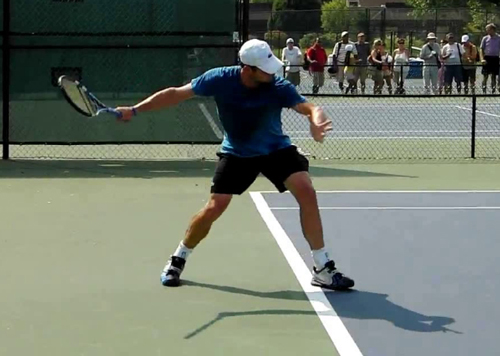 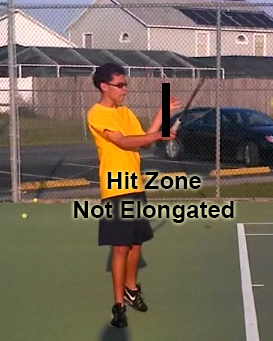 The left arm helps to elongate the swing by keeping the body sideways longer, which gives a longer hitting zone. A longer hitting zones gives a higher margin of error as the swing can be mistimed (as long as its too early and not too late) and the ball can still be hit successfully. 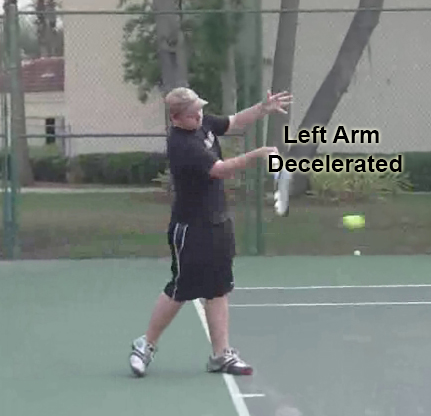 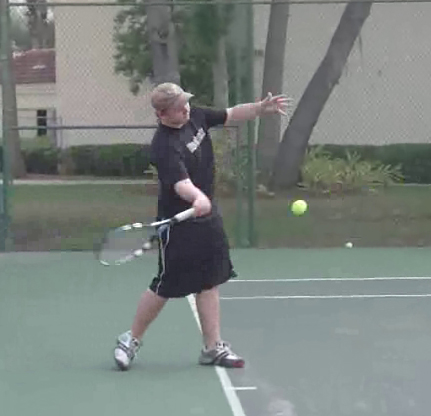 Almost to where is will look like it has stopped when viewed with the naked eye. This really helps to accelerate the racquet as it nears the contact point.

As the racquet starts to come forward the knees should start to straighten. This lifting up action will help lift the ball up high over the net. It also helps to lift the racquet from its position under the ball to its eventual position of level with the ball. Hover over the below image to see the knees unbending. 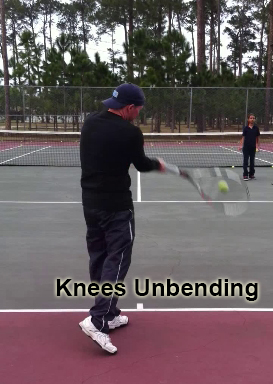 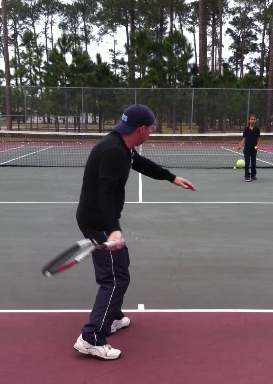 The bodies weight should continue its transfer onto the front foot. This will genereally happen automatically as the racquet moves forward if stepping in a neutral or even open stance and the contact point is out in front of the body. The one thing that should not happen at this stage is to jump or hop before the ball is hit. Jumping will make it impossible to control the bodies movement. If balance has been maintained properly jumping won’t hurt balance too much, but this only likely to happen for really advanced players. The below image show Caroline Wozniaki jumping before she hits the ball. 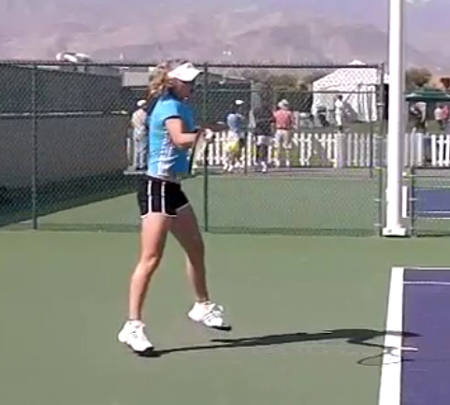 She may have jumped here partly because the ball is bouncing high, but because she is such a good player she can get away with it. But even Caroline won’t jump on every forehand. Here is a different forehand she hit in the same rally. 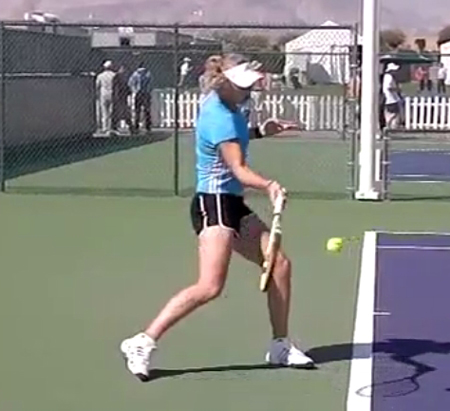 The only time a jump should possibly happen is after the swing as the swings momentum can make this happen as the bodies momentum which is going up may lift the body off the ground. Even then it should only happen occasionally. Jumping can also make the recovery time increase as its virtually impossible to start recovering while in the air. The player has to wait until they land to start recovering.

The back should continue to be straight throughout the swing. 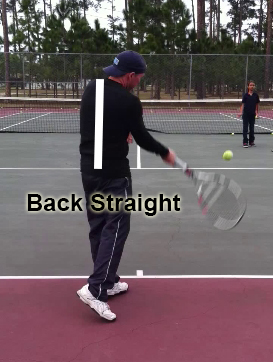 Just like if lifting a heavy package. This helps to keep the swing balanced by keeping the bodies center of gravity centered with the body.

The belly button should continue to rotate until it reaches a position that makes it point towards the net post. Hover over the below image to see the belly buttons movement.

As the belly button nears a position to where it is pointing towards the net post, it will decelerate quickly. This should happen before the racquet reaches the contact point. This deceleration of the belly button signifies the deceleration of the shoulders and trunk which will help accelerate the racquet forward. If the belly button keeps rotating and doesn’t slow down, the full amount of energy built up through the kinetic energy chain to this point will not be transferred to the arm and racquet and the swing will not be as powerful. If the hips and shoulders don’t slow down it will also facilitate a horizontal swing instead of a vertical swing since the bodies momentum will pull the racquet too quickly to the left..