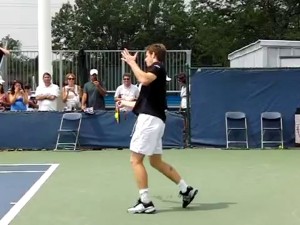 The contact point is probably the most critical element to a successful swing. Any mistake here will have dire consequences on the shot. Technically at this stage no corrections can be made to the swing as the ball is on the racquet for only a couple of milliseconds which leaves no time for further adjustments. As with the other stages all the pro’s will do the most critical key points because if they didn’t they would most likely miss the shot.

The first example is Ana Ivanovic. The only key point Ana does not do is keep her belly button pointing towards the net post. Her belly button is towards the net which means she has over rotated. A lot of pro players do this. They can get away with it because they will still keep the swing vertical. Most players will struggle if they did this because they would end up swinging horizontally. 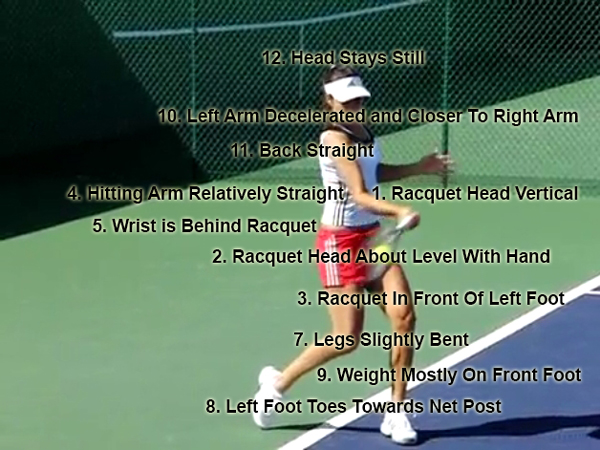 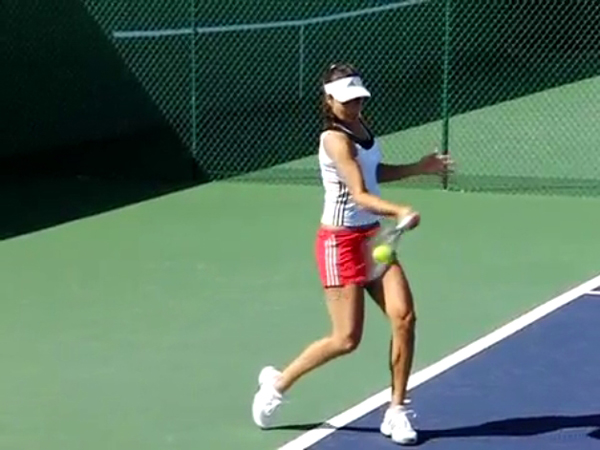 While this does not effect the swing, it still does effect her bodies momentum. Her body will pull her towards the left side fence which will make it virtually impossible to move forward towards the net. This can plainly be seen in the below image. 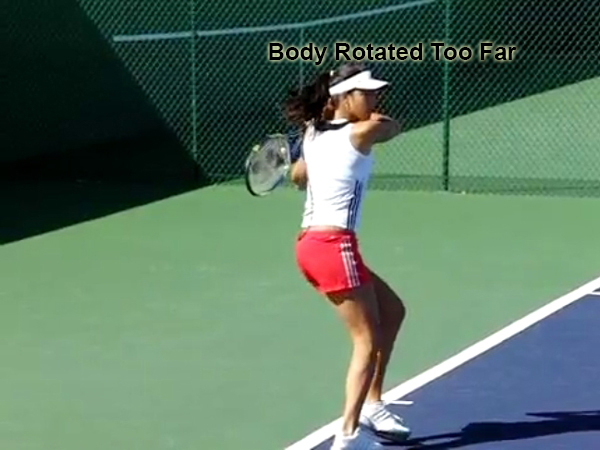 While this is good for her in this particular situation as she may need to recover to the left anyways *depending on where her shot is headed). It limits her ability to come forward which gives her less options for winning the point.

The next example is Andy Murray. Andy does all of the 12 key points. 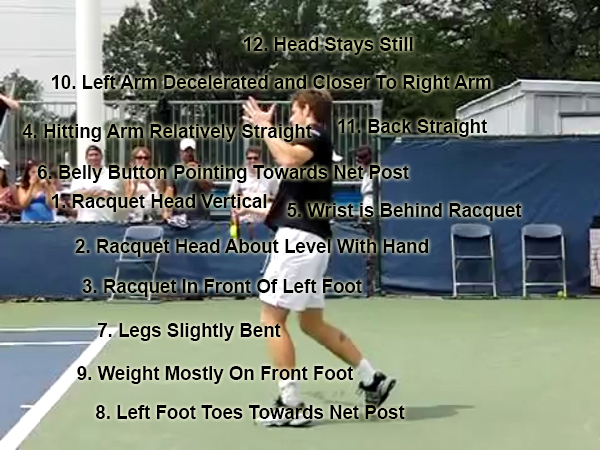 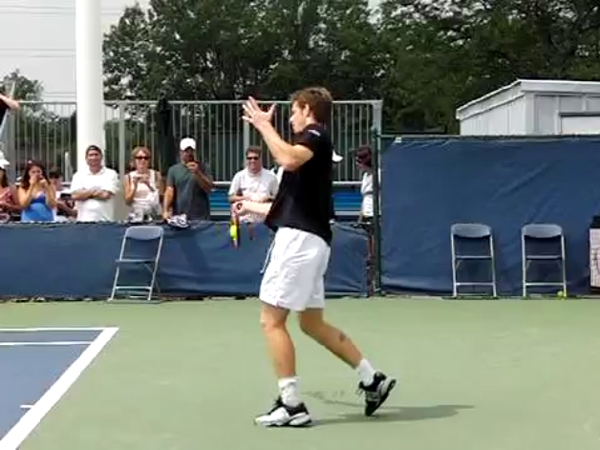 The next example is Jo Wilfred Tsonga. Jo does all 12 key points. Although if I was being critical of his contact point I would say his belly button looks somewhat past the net post and I also don’t like that his weight is too much on the left foot at this stage. But technically he is still doing all 12 key points. 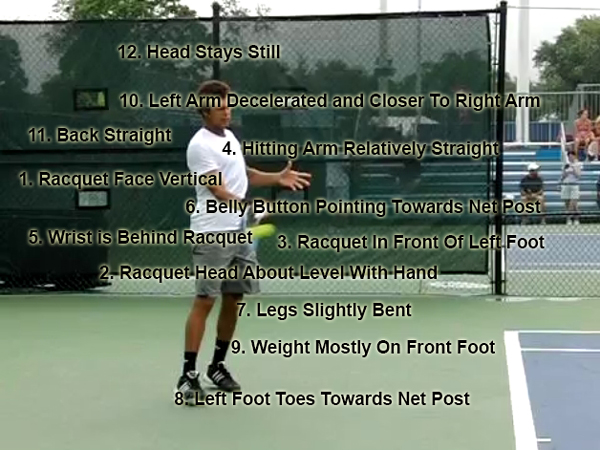 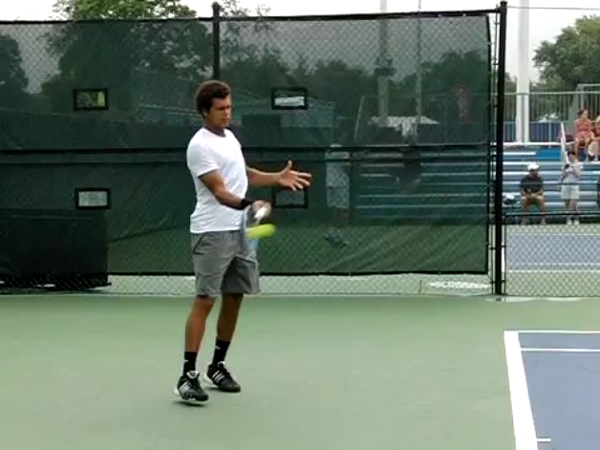 The next example is Li Na. She too, like Ana Ivanovic has over-rotated at this stage, although it is not quite as much as Ana. 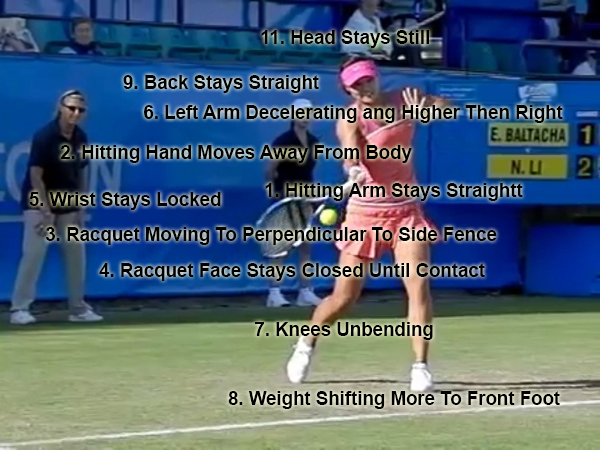 The next example is Milos Raonic. Milos does all 12 key points, but like Tsonga is maybe slightly over rotated. Otherwise his contact point is really good. 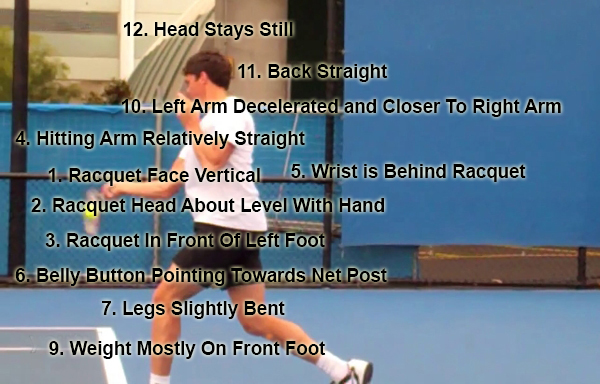 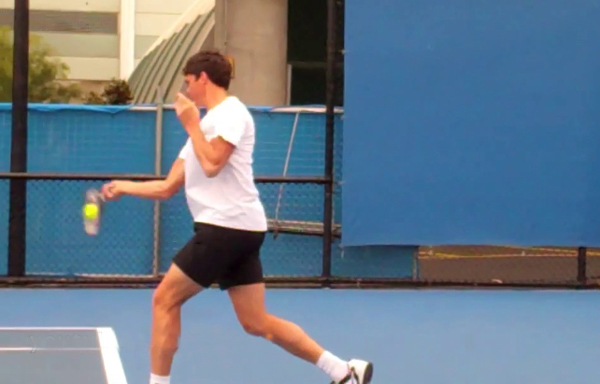 Because there is a slight over rotation his finish will over rotate a little as well. 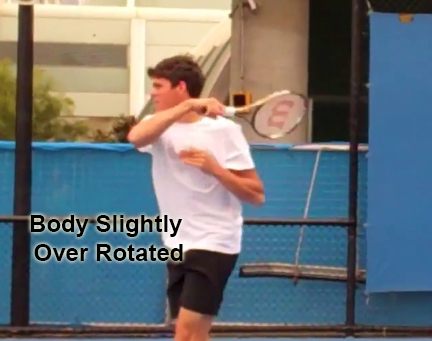 Since a correct contact point is so critical to high level tennis there will not be much difference between players. The biggest difference, the over rotating, can actually help players who play on the baseline recover quicker. It basically boils down to philosophy. If getting to the net (having more than one option) is important then don’t over rotate. If its not important, then its OK to over rotate. Over rotating is not wrong to do, it just limits a players options. This is done by many pro’s and is the single biggest reason, from a technical standpoint, that the game is played almost exclusively from the baseline at the pro level.