There are five big mistakes that people make at the contact point. Any mistake at this point will generally have a very adverse effect on the shot as there is no time to correct the mistake. The two biggest problem will either be not getting the racquet face vertical or not getting the contact point far enough out in front of the body. Both of these mistakes are closely related and generally if one is done, the other is also happening. 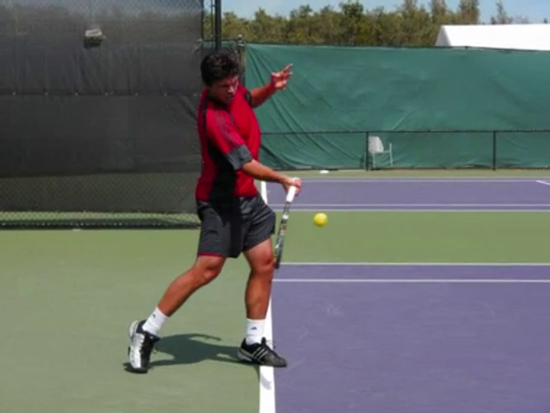 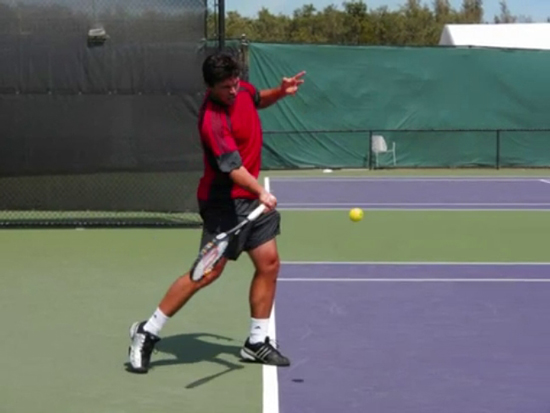 This means the only way someone can contact the ball late and get a vertical racquet face is to move the wrist and/or forearm. This will generally cause the racquet face to open up too far as it is very difficult to time the moving of the wrist correctly so that at the very millisecond the ball is being contacted, the racquet face is vertical. It is hard enough to time the swing so the ball is hit with a correct swing that doesn’t involve moving the wrist, adding a second timed element (moving the wrist) makes it virtually impossible to have a consistent forehand. 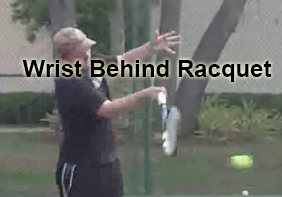 o emphasize this point, take your racquet and put it at the correct contact point and try moving your wrist

Now take your racquet and move the contact point earlier in your swing and see how much easier it is to move your wrist.

For advanced players who use an open stance the belly button may be pointing towards the net at contact, but they will still swing vertical and keep their hit zone elongated.

Other common mistakes include: Not getting the front leg straight enough, (to be continued)…