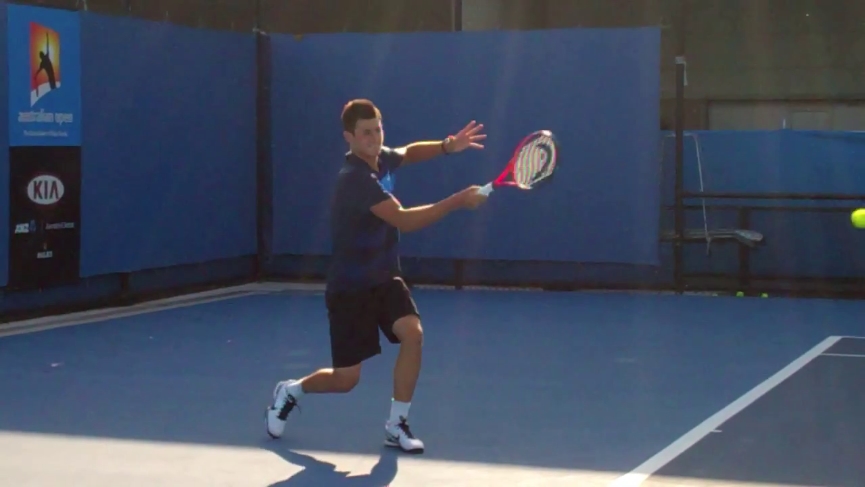 Without a doubt the biggest mistake on the follow through is not tracking out with the racquet three frames towards the target. I would say this is the number one overall problem of the forehand swing, partly because of the way this part of the swing is neglected by most people who teach tennis. They either don’t talk about tracking out towards the target or most likely teach things that shorten the hit zone. Even people who teach the follow through correctly may have a hard time getting students to track out towards the target. Often the student will be so concerned with finishing with the racquet over the left shoulder that they will immediately try to get the racquet there after contact. This will tend to shorten the hit zone. Numerous other things will also cause the hit zone to not extend out three frames past the intended point of contact. Moving the wrist or pronating the forearm, trying to do the windshield wiper motion,

Many times the racquet not tracking out three frames is due to the movement of the wrist. Even though this has been mentioned numerous times previously times throughout this course it can’t be stressed enough. The wrist should NOT move until well after the ball has been contacted when hitting the forehand. It doesn’t even need to be moved at all. The main benefit of moving the wrist stressed by people who teach this technique is an increase in topspin. This benefit can be obtained without needing to move the wrist by bending the knees and brushing up at a higher angle. The drawbacks of moving the wrist before contact are numerous. The most immediate concern would be the loss of consistency. Moving the wrist makes the racquet head unstable which can make off centered shots harder to control. Moving the wrist also pulls the racquet early out of the hit zone by making the swing more horizontal then vertical. A more long term concern is the potential damage to the wrist that can happen from moving the wrist. The racquet is heavy and

Another big mistake is over rotating the right foot too far forward. This tends to happen more for players who sing horizontally as the body will rotate much more uncontrollably in a clockwise direction which will pull the foot forward. Bad balance will also tend to pull the right foot to far forward. This makes recovering for the next shot much more difficult as first the bodies momentum needs to be stopped and then the body needs to recover backwards which is much more difficult to do then to recover in a lateral or forward manner.

Many players will leave their left arm down at their side as the racquet swings over the left shoulder on the finish. This will tend to tighten up the body which can lead to a much less powerful swing as the body needs to stay relaxed throughout the whole swing. If the body is tensed up at the end it had to start tensing up before then. Since the follow though is a relatively fast motion the tensing up of the body will have most likely started before ball contact. The left arm down at the side makes it impossible to catch the racquet at the end of the swing. This will make the overall finish longer and can make recovering for the next shot take longer.

Another big mistake is not bringing the racquet high enough on the follow through. There are two times this is a problem for a player. One is when they are a beginner and they have a tendency to swing horizontally. The second is a more advanced player trying to finish with the racquet on their hip.

Head looking up before shoulder hitting chin. Even after the ball is contacted the head should not move to assure that the head does not move before contact. The follow through portion of the follow through happens so fast that there will still be plenty of time to see where the ball is going and what the opponent is doing. Just like the racquet and rest of the body, the head needs to be in the same position it was at the intended contact point.