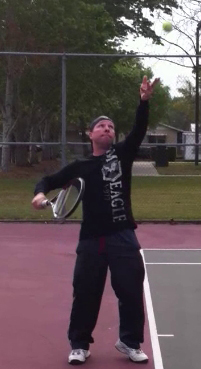 The first motion of the serve is done by the shoulders. To start the serve just start rotating the shoulders in a clockwise motion. The shoulders should rotate in a very similar fashion to if you where a pitcher in baseball. 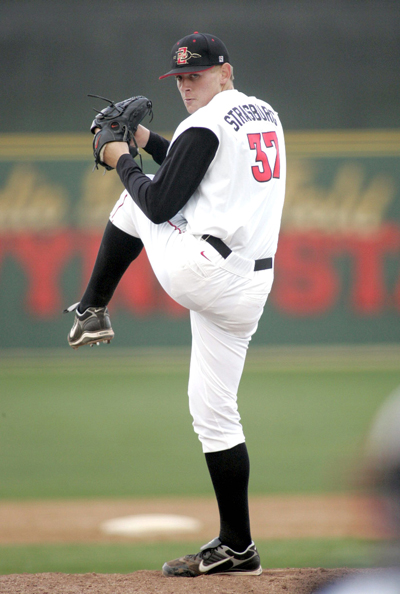 The shoulders should rotate in a lateral fashion, and should stay relatively level with each other as they turn. Hover over the below image to see the shoulders stay level. 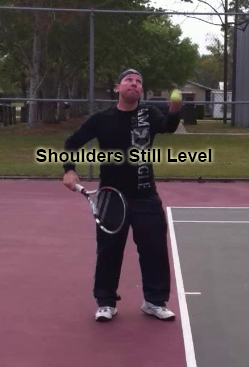 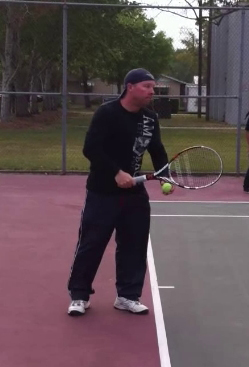 The shoulders should rotate between 30 and 45 degrees. Hover over the below image to see the full rotation. 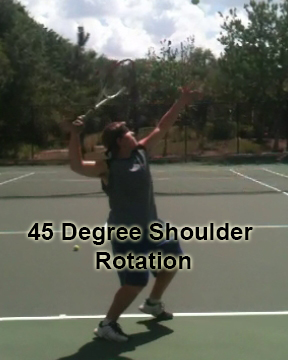 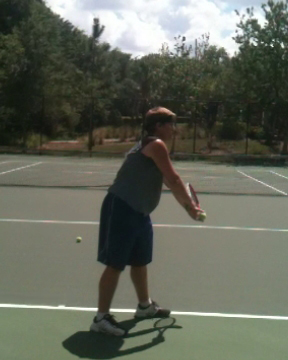 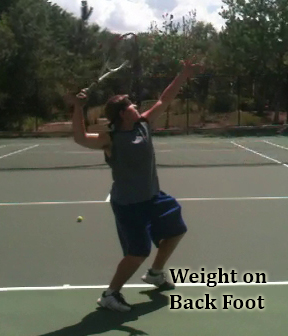 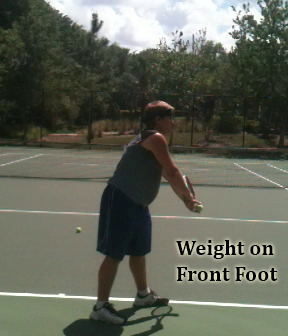 As this happens the front foot will come up. Some players will bring the toes of the front foot up as they shift the weight onto their back foot. Hover over the below image to see the front toes point up. 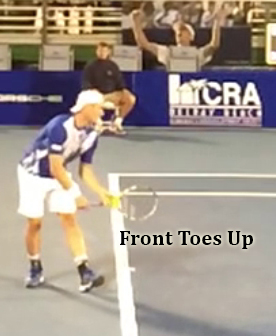 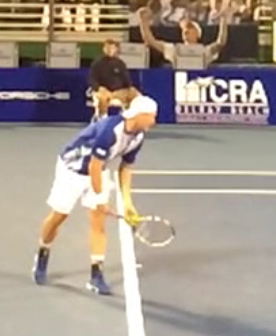 Lots of professional players bring their front toes up as they rotate their shoulders and shift the weight onto their back foot. I prefer players to raise their heel and leave their toes on the ground when rotating the shoulders. Hover over the below image to see the heel come up as the shoulders rotate. 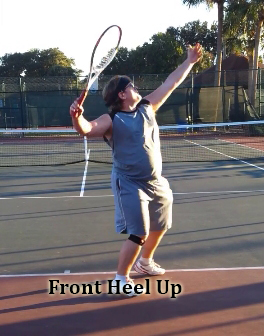 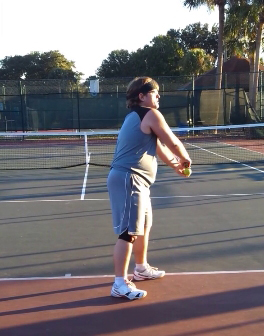 Obviously its easier to maintain balance while on your toes. This is the reason to keep you toes down as the shoulders rotate. 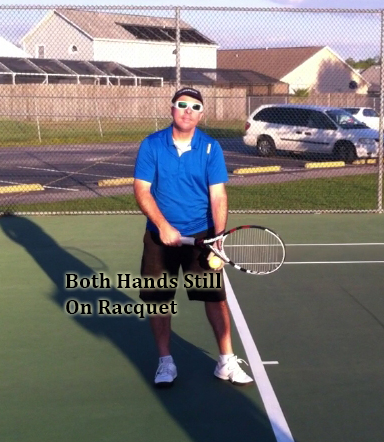 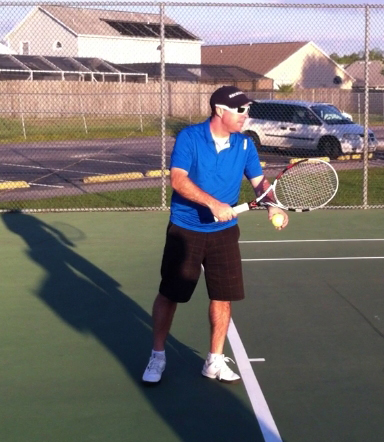 Once the left hand is slightly past the front of the left leg the hands can start to separate. 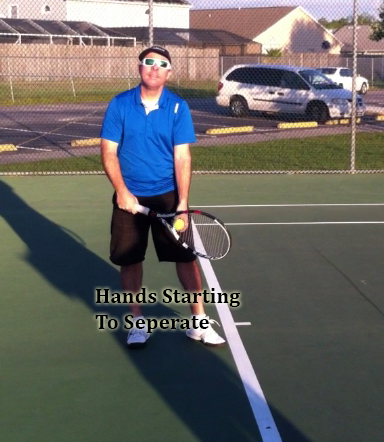 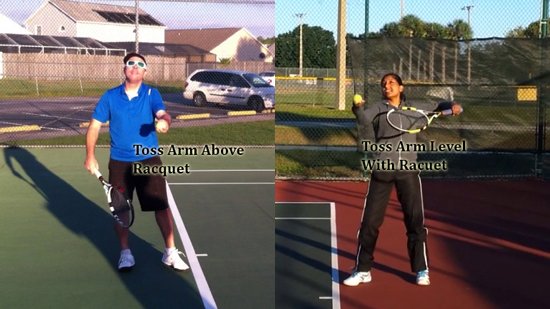 Many players end up with the racquet above the toss arm. 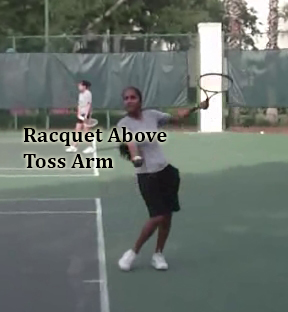 After the hands separate, slowly start to raise the racquet making sure the palm of the racquet hand stays pointing towards the ground while the knuckles point up. 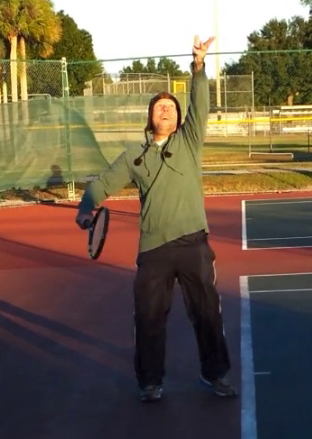 This must be done slow as it is impossible to keep control of the racquet if the racquet is brought up too quick. Hover over the below image to see he palm stay down as the racquet rises. 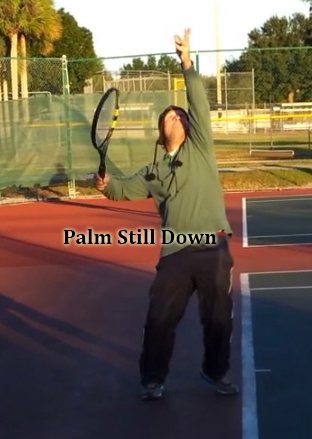 If the racquet is brought up too fast it will force the palm up and cause a loss of power, control and balance. 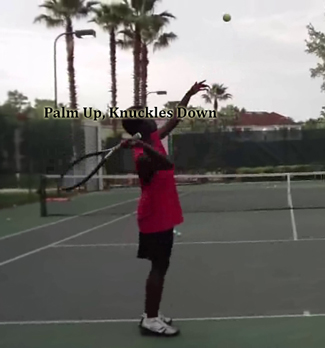 This will make it impossible to pronate which will lead to a lack of power and spin. 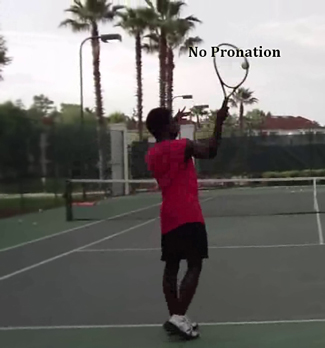 At the end of the unit turn the racquet should be slightly over the head, but still on the right hand side of the body. It will end up looking like someone is saluting. 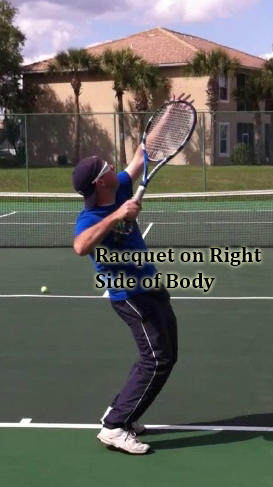 As the racquet raises the hitting arm should stay bent. 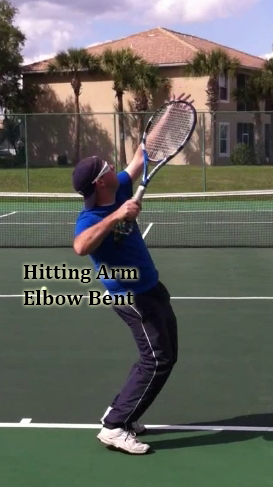 Many players (including professional players) will keep their hitting arm straight. 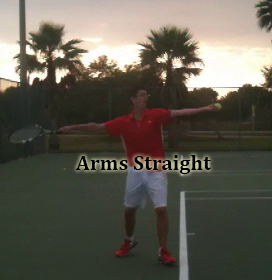 It is not wrong to keep the hitting arm straight, I just prefer to have players keep their hitting arm bent so that the elbow can stay bent and high. Dropping the elbow can get the racquet out of sync with the body and also lead to bending the back. Bending the back at best will lead to getting the body out of sync with the racquet and at worse lead to an injury. Plus the arm just needs to bend again anyway at the racquet drop phase. So its a wasted movement to straighten out the arm. Hover over the below image to see this happen. 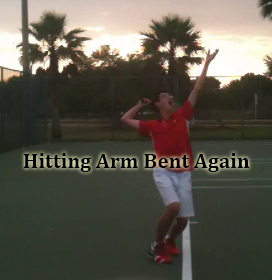 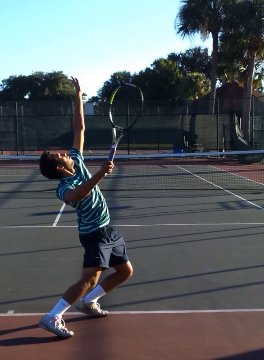 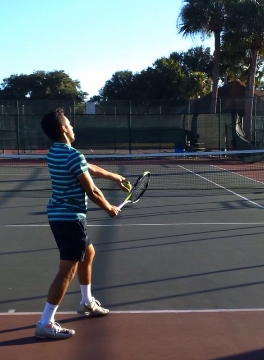 The movement of the arm is not a straight up and down movement since the shoulders are rotating. Many players will try and have the arm just go down and up. This makes it virtually impossible to rotate the shoulders thus limiting the power of the serve. 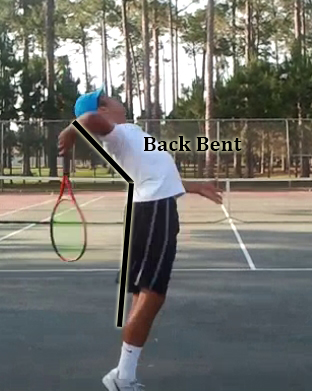 Bending of the back can lead to back injuries or if the back isn’t bent and the ball is still tossed to the left the arm or shoulder can be injuried.

The movement of the arm is an out and up movement. The arm should move from the belly button to way out in front of the body.

The back should stay straight throughout the unit turn.